The State of Food Security and Nutrition in the World 2018 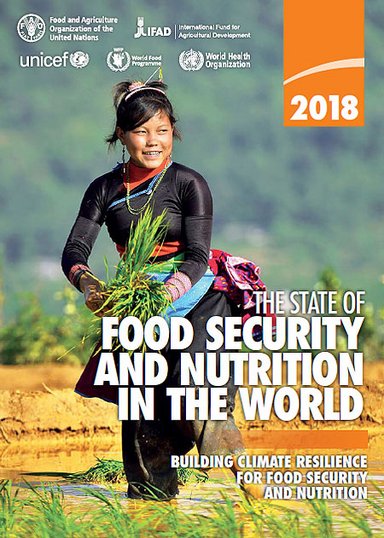 New evidence continues to signal that the number of hungry people in the world is growing, reaching 821 million in 2017 or one in every nine people, according to The State of Food Security and Nutrition in the World 2018 released today. Limited progress is also being made in addressing the multiple forms of malnutrition, ranging from child stunting to adult obesity, putting the health of hundreds of millions of people at risk.

Hunger has been on the rise over the past three years, returning to levels from a decade ago. This reversal in progress sends a clear warning that more must be done and urgently if the Sustainable Development Goal of Zero Hunger is to be achieved by 2030.

The situation is worsening in South America and most regions of Africa, while the decreasing trend in undernourishment that characterized Asia seems to be slowing down significantly.

The annual UN report found that climate variability affecting rainfall patterns and agricultural seasons, and climate extremes such as droughts and floods, are among the key drivers behind the rise in hunger, together with conflict and economic slowdowns.

Further Information on Food Security & Nutrition around the World